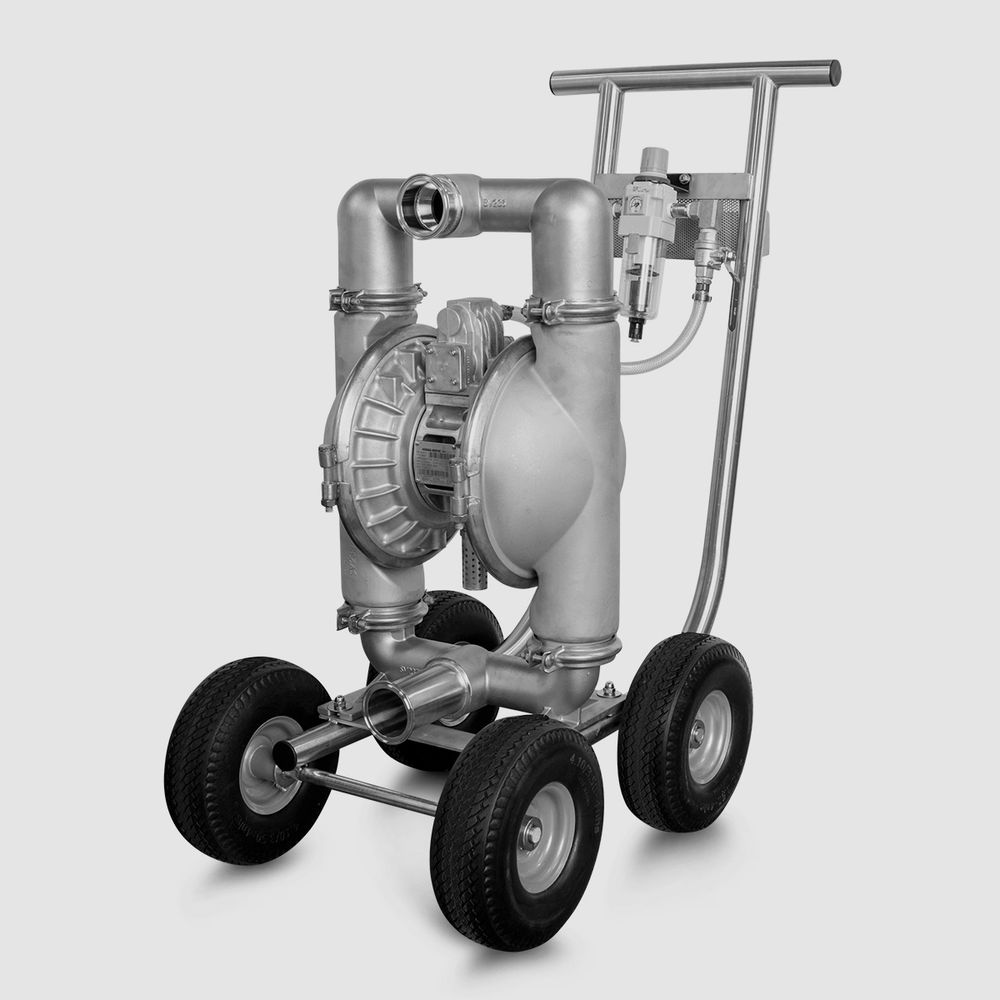 How to Size Your Air Compressor for an Air Diaphragm Pump

Wineries love them because they're gentle. Distilleries and ethanol extraction facilities love them because they run on compressed air rather than electricity, which mitigates the risk of a spark igniting hazardous fumes. Whatever the case may be, air-operated double diaphragm pumps (a.k.a. AODD pumps) are one of the most popular pumps we sell. They're almost like magic: a pump that runs on air? No electricity? Unbelievable! But we all know there's no such thing as a free lunch. Pumping power has to come from somewhere. In this case it comes from your air compressor. This leads to one of the most common questions I get: "How big of an air compressor do I need for an Air Diaphragm Pump?" Let's break it down.

AODD pumps use a lot of compressed air. A lot. You're basically leaving a valve open all the time while an AODD pump is running. As a result, you want an air compressor that can keep up with the air it's losing. This is measured in CFM (sometimes called SCFM. For our purposes they're the same thing). It stands for cubic feet per minute. CFM is a measure of the volume of compressed air your compressor is capable of generating. This is the crucial value to know and understand when purchasing a compressor.

If your pump requires, say, 30 CFM of compressed air, but your compressor is only capable of generating 10 CFM, there's a 20 CFM deficit. Your compressor can't keep up, and you'll never be getting the flow rate/pressure you need.

Quite often when I'm talking to a customer about sizing an air compressor, or about whether they can use a compressor they already have, they say something like "I have a 25 gallon compressor. Is that big enough?". Unfortunately, gallons are just a measure of how much compressed air it can hold, not how much it can generate. CFM is king.

So, the rule of thumb is as follows: take the liquid flow rate of the pump you're considering and multiply that number by 0.75. That's the CFM you'll need for most cases.

For example, if you're looking at the SimpleSpirits 43, its liquid flow rate is 49 GPM. If you want to run it full speed at 49 GPM, just take 49 and multiply it by 0.75. and get You'll end up with a bit more than 36. That number is the CFM target you're looking to hit to power the pump.

This calculation works most of the time, but it can be deceptive. Some pumps are more efficient than others. That is, given the same amount of compressed air, one pump may push more liquid than another. So the real way to know how big of an air compressor you need is to read the pump's "curve".

It may seem like an arcane art, but pump curves are pretty easy to understand once you know what you're looking for. They only require you to know two things:

1. How much liquid do you want to move in terms of GPM?

2. What pressure do you need to move the liquid at?

With those two figures you now have a "duty point", or an ideal point where you will likely want to run your pump.

Now let's pretend we have a duty point and a pump in mind. Again, let's say you're getting the SimpleSpirits 43 and you'll want to run it at 30-35 GPM. Most of the time you'll be pumping into tanks no taller than about 15 feet high. You won't be using the pump for any pressure-intensive tasks like filtration, so you don't need much pressure. Let's bring up the pump curve. 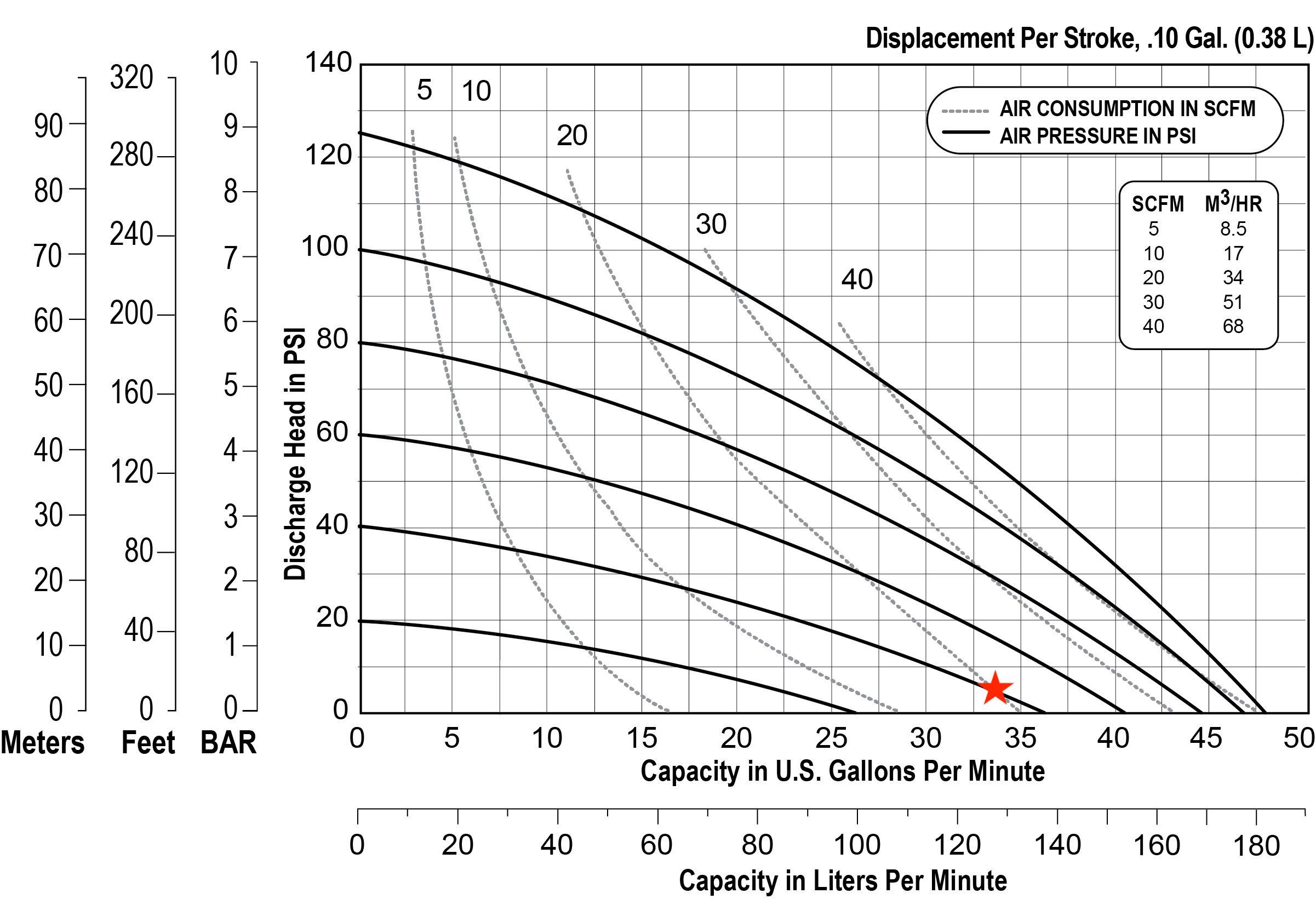 About 34 GPM and 5 PSI or so of discharge head

I've put a red star at the duty point, about 34 GPM and 15 or so feet of head (or <10 PSI). Now luckily, this duty point already intersects with two lines already on the curve: a dotted line and a solid line. The dotted line represents the required CFM and the solid line represents the required PSI. To find out exactly what kind of compressor you need, just trace back to the origin of both lines. You'll see that the solid line leads back to 40 PSI, while the dotted line leads back to 20 CFM. So, in this case you'll need a compressor capable of generating 20 CFM at 40 PSI. Take this info to someone who sells air compressors and they should be able to recommend an air compressor for you.

Now you may be thinking "What if my duty point doesn't conveniently intersect with two of the already-drawn lines on the curve? Eh, smart guy?" It's true, I cheated a bit by using a point that already had the lines drawn. But the answer is, it's easy to figure out any duty point on a curve. You just have to imagine where the lines would go. You can use the existing lines as a guide. Let's do just that.

Imagine you need to reach 30 PSI at 36 GPM as your duty point. 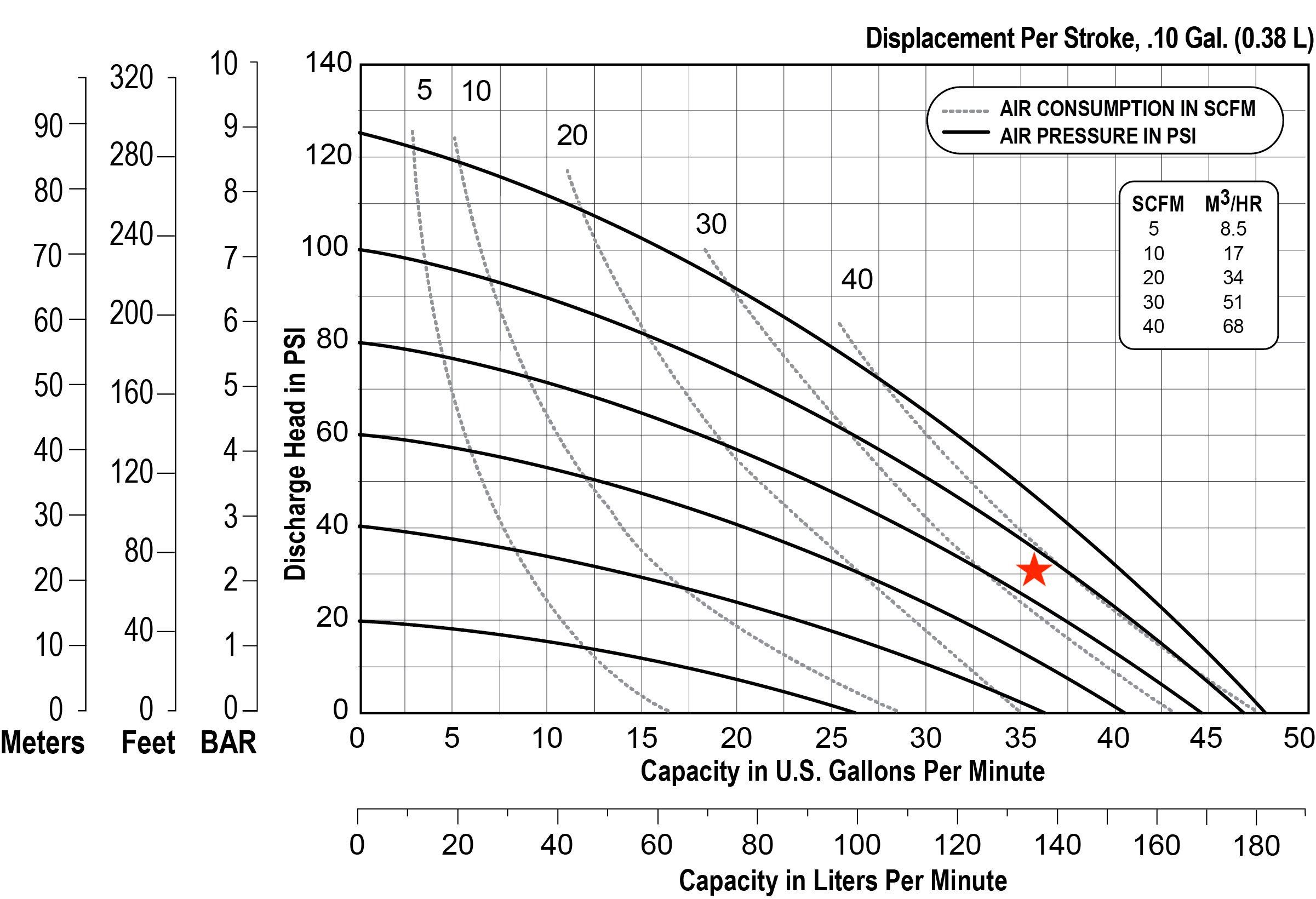 No intersecting lines where we need them. What to do?

Drat! There are no existing lines at that point. But if we use our imagination we can see where the lines would probably go. I'll draw them in. 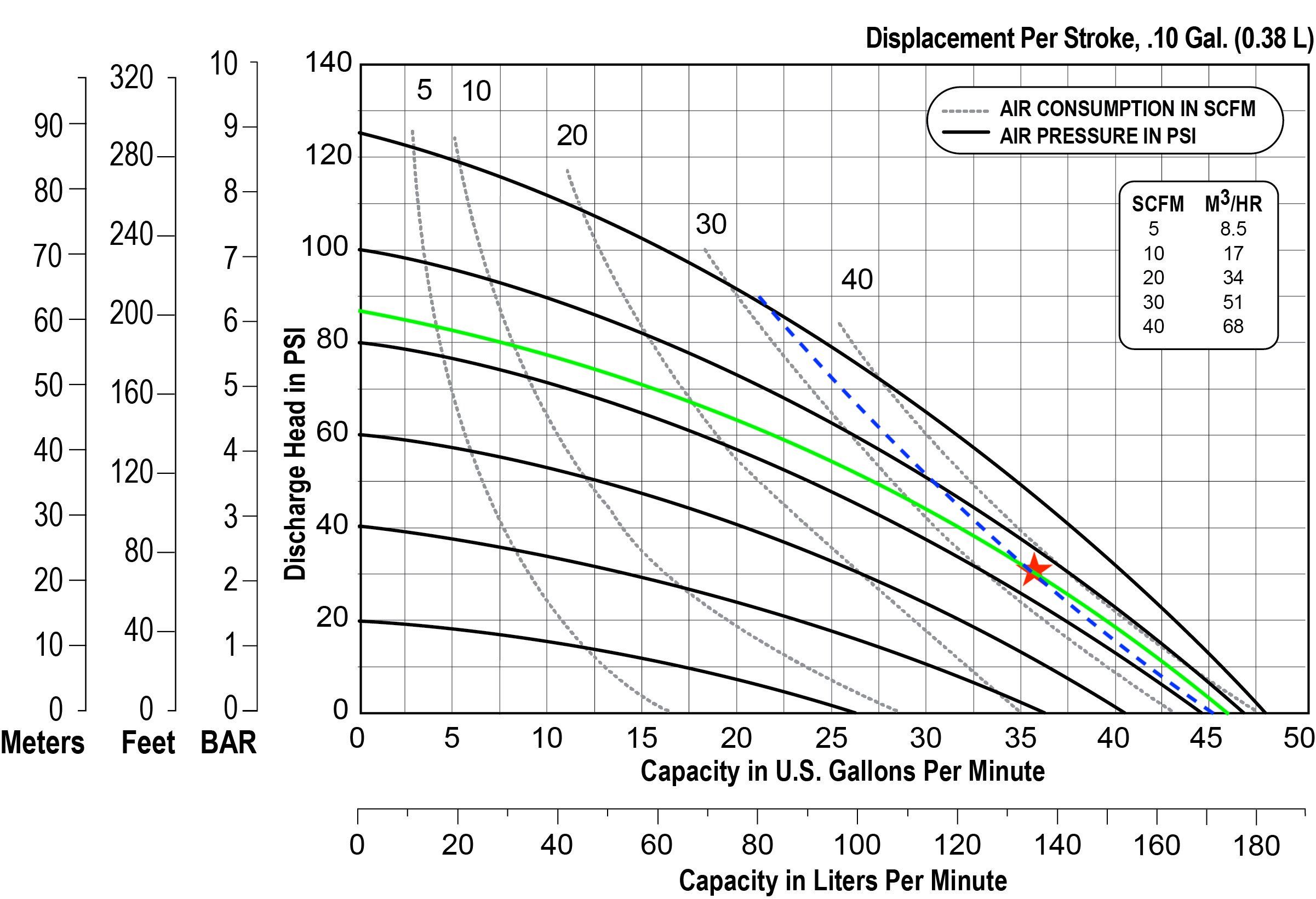 While not perfect, it gives us a good idea. The dotted line represents the CFM, somewhere between 30 and 40. The green solid line represents the PSI. Probably about 90. So, in this scenario you'd need a compressor capable of generating about 35 CFM at 90 PSI. Not so hard to figure out.

Now this is just the air required to run one pump. If you're running multiple pumps or other pneumatic equipment, plan accordingly and work with the folks selling you an air compressor to size appropriately.

Most pumps operate best at the middle of their curves—not pumping full-out, diaphragms a-blazing. You'll get longer life out of the wear parts if you oversize the pump relative to your needs. It'll also be less noisy, and vibrate less. For that reason, we typically recommend buying a larger pump than you need, if it is within your budget.

Oversizing your pump also nets you another benefit: larger AODD pumps typically use available air more efficiently than smaller pumps. Prove it, you say? Well, let's take a look at the pump curve of a slightly larger pump: the SimpleSpirits 72. It has a normal max flow rate of around 71 GPM. Our previous example showed that a compressor capable of generating 35 CFM at 90 PSI, got us 36 GPM and 30 PSI of liquid flow. What do those same numbers get us from a larger pump? 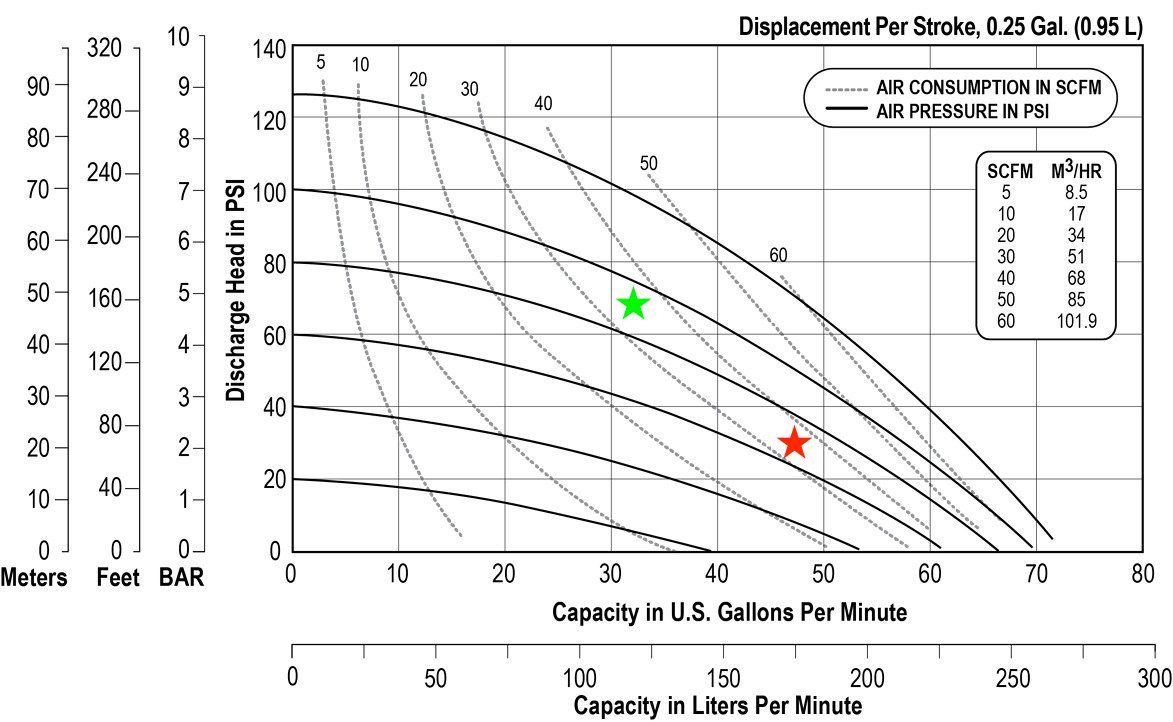 Here I've added two duty points that demonstrate the extra efficiency you get from a larger pump. The green star shows where you'd end up using the same compressor. Slightly less GPM, but way more pressure headroom is available to you. Nearly 80 PSI!

Likewise, the red star shows how many GPM if your duty point remains 30 psi. You get nearly 50 GPM! In both cases the duty points are nearer the center of the curve, so it will run more efficiently, quietly, and with less wear-and-tear. Not bad.