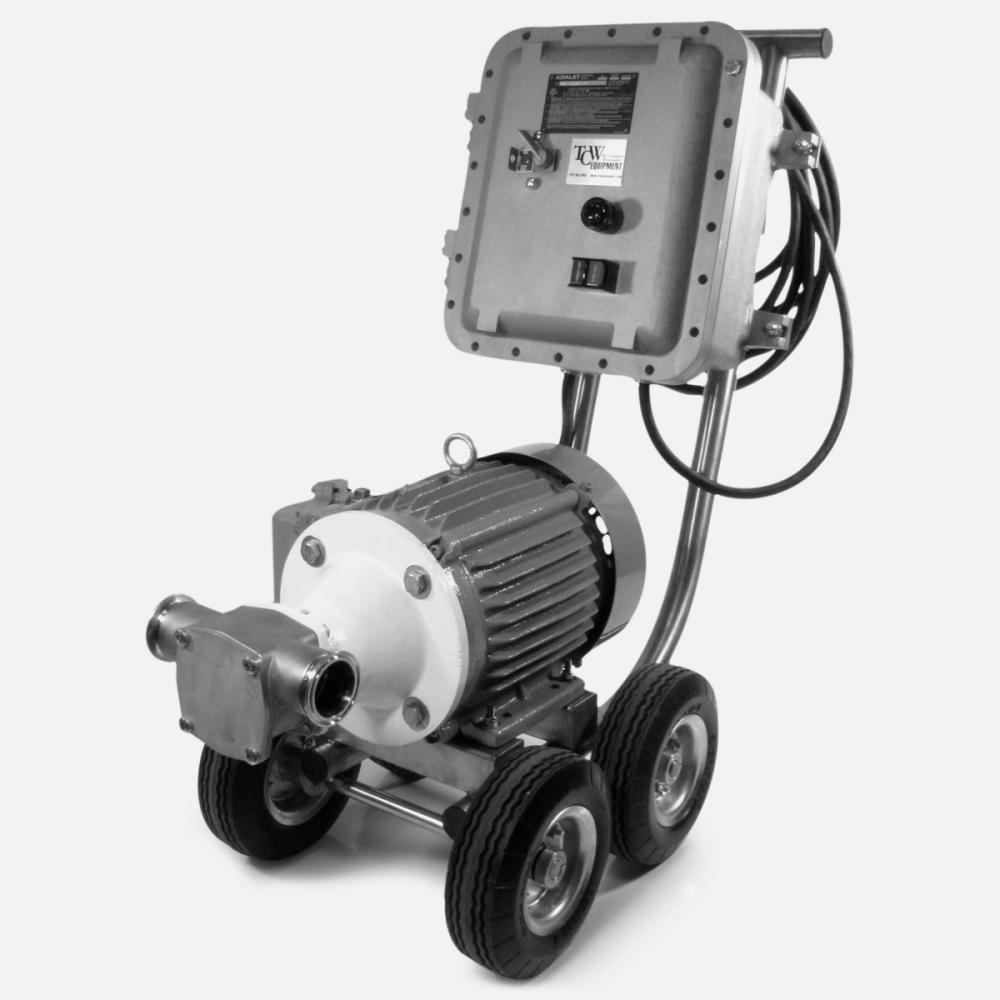 Hazloc, ATEX, C1D1, XP, UL-Listed…there's a lot of confusing jargon when it comes to safety-related equipment in your distillery. It's too bad because safety is absolutely critical. It should be easy to understand.

Why Are Pumps a Safety Concern in Distilleries?

Distillery fires are rare, but they do occur. And they can be devastating.

A fire needs three things to get started:

High-proof alcohol is undoubtedly fuel. Oxygen? Well, that's present in the air we breathe (thankfully). So, distilleries have 2 of the 3 prerequisites to start a fire. All you need is an ignition source.

Thankfully, you can keep ignition sources out of your distillery through forethought, planning, and an understanding of hazardous locations. Thinking about your pump is one aspect of planning ahead for safety.

Many pumps run on electricity. Electric sparks are a perfect ignition source. So, if you are using electrical equipment around ethanol, you want to make darn sure that it is not providing a convenient ignition source for fires to start.

While most distillers we talk to are extremely careful, some sniff their nose at the idea that an electric pump could be a source of ignition. “I've used electric pumps for years and never had any problems.”, they say. Our response is: “You haven't had any problems yet”

It just takes one time…

So… No Electric Pumps in a Distillery?

You can use electric pumps in a distillery. You just need to make some considerations or modifications in the type of pump or where it's used.

The first thing to understand is some terminology with regard to pumps. Take the Jabsco SQN 20 pictured below, for example: 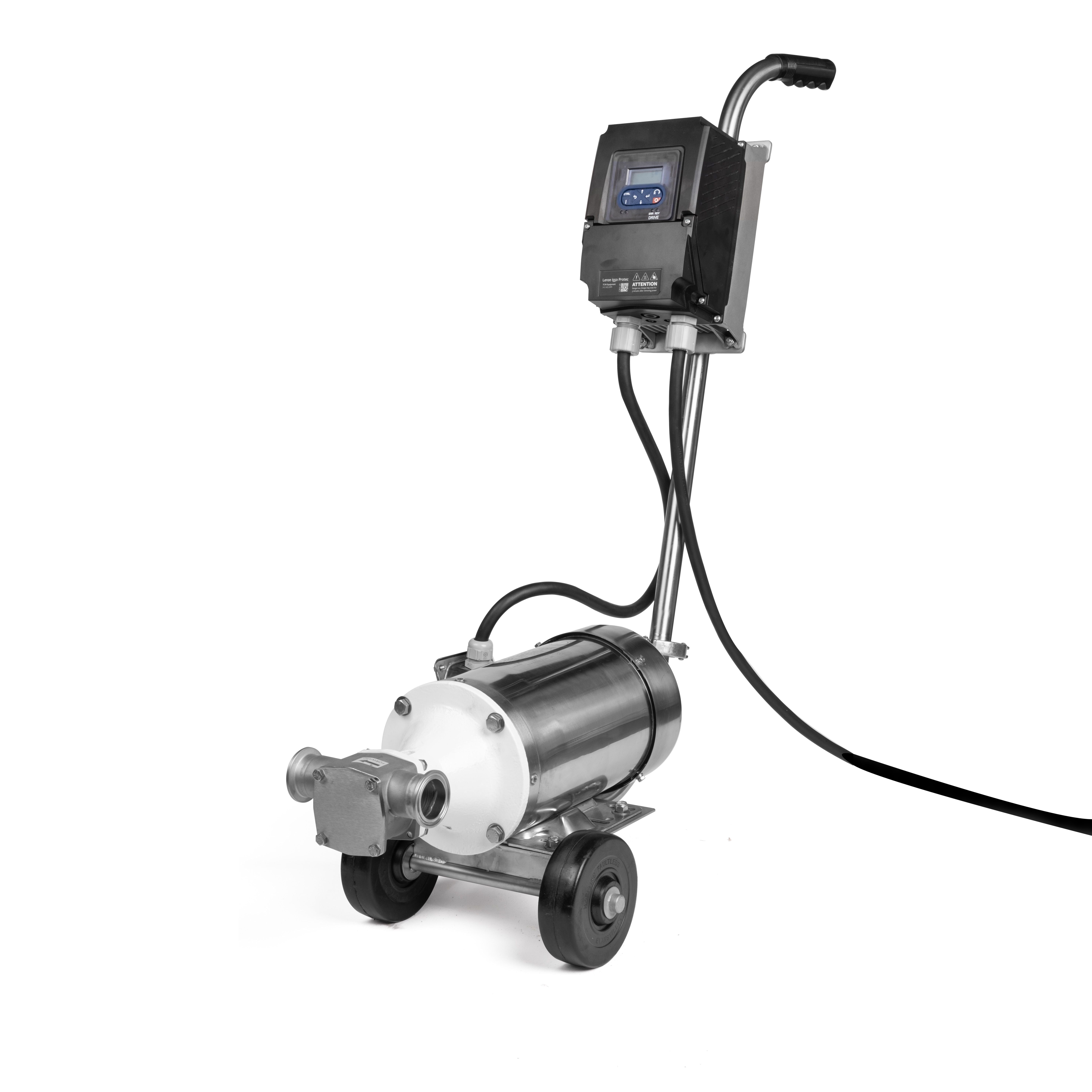 You might refer to this complete assembly as a pump. Technically, though, the “pump” is just the stainless head at the front. That's where the pumping happens.

This pump assembly is composed of at least 4 distinct parts: the pump head, the motor, the VFD, and the cart. Let's figure out which part is which.

See the black box in the picture above? The one with wires running in and out of it? It's called the Variable Frequency Drive, or VFD. It's the brains of the pump. To vastly oversimplify, it takes electricity from your facility and conditions it to run the motor. You can use it to control the motor's rotation speed, thus controlling the flow rate of your pump.

The shiny stainless steel cylinder behind the pump head is the motor. It turns electricity from the VFD into mechanical motion that powers the pump.

Let's go through these pieces to figure out how they relate to safe pumping in a distillery. We'll start with the motor.

The motors we use on our pumps are certified for use in Class I, Div. 2 hazardous locations.

If your eyes start to glaze over when you see words like “Class I, Div 2”, don't worry. There are plenty of resources on the web to help you understand each of the classes and divisions that can exist. Just do a search for “hazardous location classifications” and you'll get dozens and dozens of articles.

In a nutshell, Class I, Div. 2 is the hazardous location (hazloc) classification that distilleries typically fall under. Class I refers to areas where flammable gases, vapors, or liquids may be present.

Division 2 means those flammable vapors are not likely to be present during normal operations, but may be present if equipment fails—say, the still cracks or a barrel leaks.

So, the motors we use on our electric pumps can be used in Class I, Div. 2 zones. Let's move on to VFDs.

Here's where things get tricky. VFDs that are hazloc-rated are very hard to come by, and very expensive.

Remember earlier we learned that fires need gas, oxygen, and ignition? Well, you have to jump through a lot of hoops to keep those three elements out of a VFD. Really, it requires a custom enclosure with many failsafes that ensure no oxygen or flammable gas gets in, and no spark gets out.

While we have installed C1D2-rated VFDs before, the high price tag puts most people off, frankly. You'll be looking at $10k-$15k just for the drive.

Still, if you want a no-compromises pump that operates like normal and doesn't skimp on safety, a hazloc-rated VFD is what you need. The SQN 50 XP is an example of such a pump. 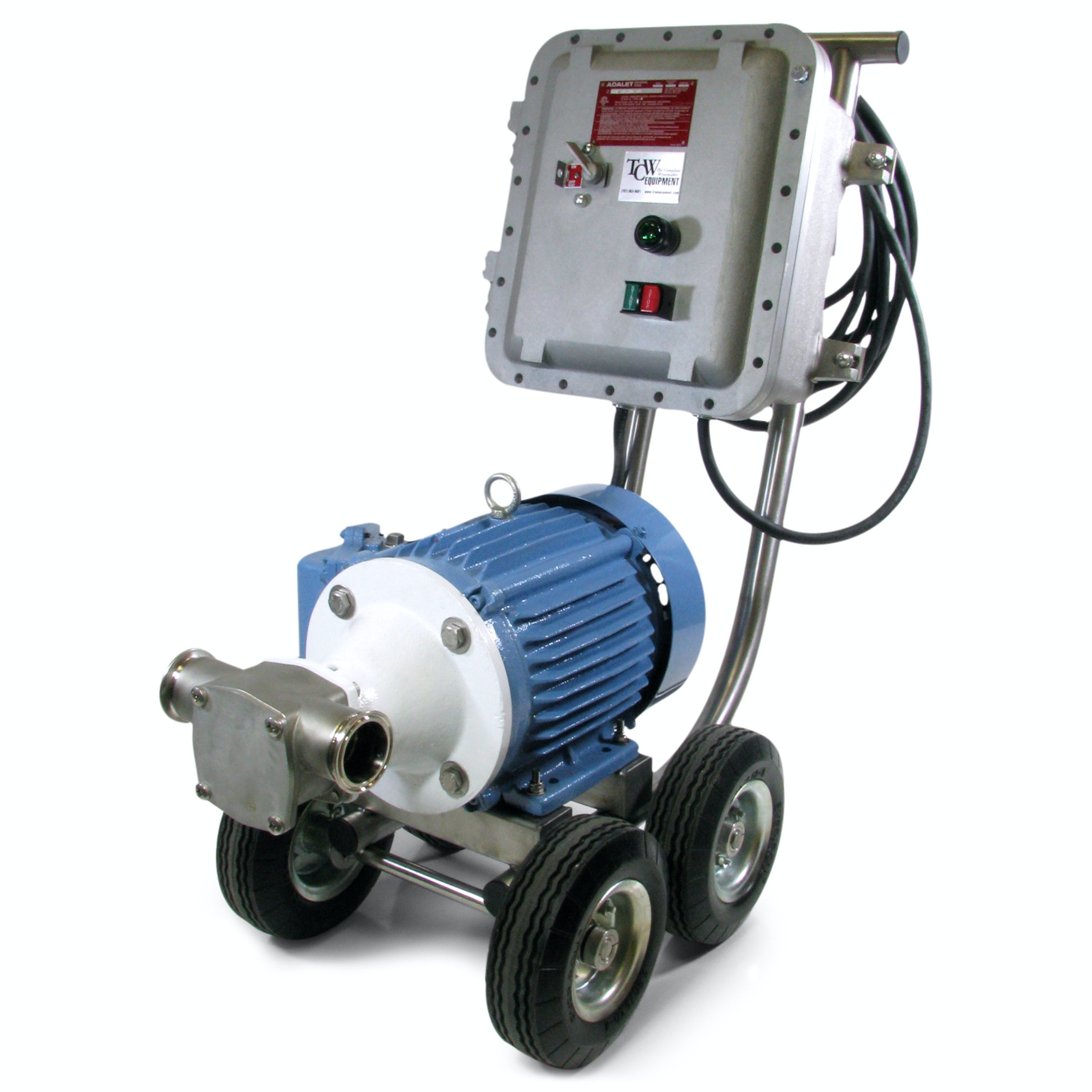 The SQN 50 XP with Class I, Div 2 VFD Enclosure

Since that solution is beyond the reach of most distilleries, we have a few “cheats” that can help circumvent the VFD question.

The VFD's main job is to electronically control the speed of the pump. If you don't care that your pump is running full speed all the time, you don't need a VFD. You just need an on/off button, a.k.a. a motor starter. Hazloc-rated motor starters are much cheaper.

This is the solution we use for pumps like the XN 114: 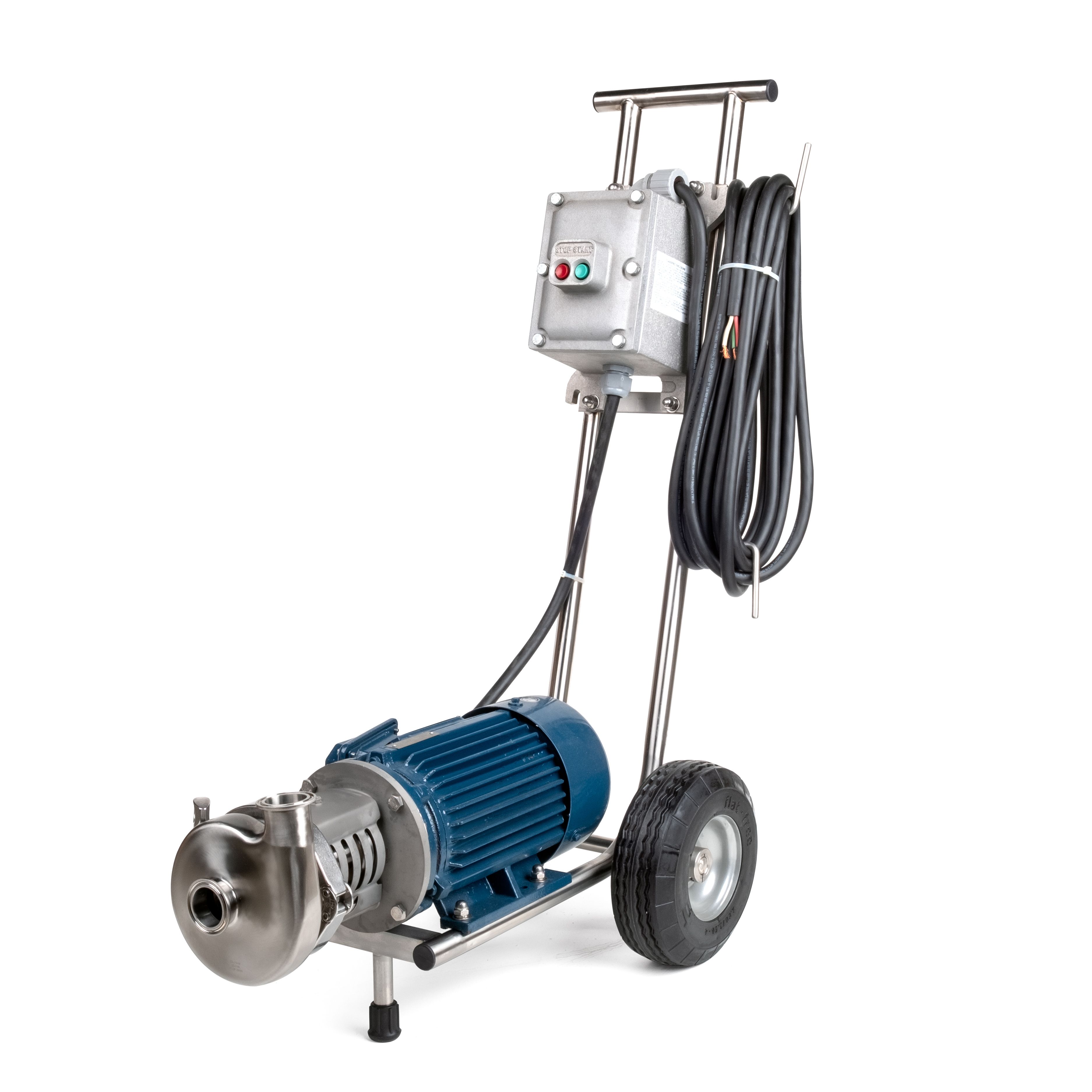 Centrifugal pumps like the one on the XN 114 are often used without a VFD. Users just install a valve at the outlet to control the flow rate of liquid out of the pump. Open it up to increase the speed, choke it down to decrease the speed.

Still, this approach does have a few downsides. Namely:

Cheat #2: Use a VFD, just keep it out of the hazardous location

Remember we said earlier that the VFD sends power to the motor? It does that through a short power cable. Just a foot or two long. But you could make that cable much, much longer. Then you can keep the VFD far away from the hazardous location. You can just mount the VFD to the wall, and plug the motor into the VFD. Now you're off to the races.

Since the motor and pump head are mounted to a wheeled cart, you have some degree of mobility around your facility, and the VFD remains away from flammable vapors.

This is a sneaky one. Remember: Class I, Div. 2 refers to locations where flammable vapors are present in case of equipment failure. If a barrel leaks or somebody leaves a tank valve open, a puddle of ethanol starts to pool on the floor. The flammable vapors will rise up about three feet before they dissipate and are no longer flammable.

So, what if you make the pump cart taller than normal? Tall enough that the bottom of the VFD is three feet off the ground, minimum? You're keeping the VFD out of the hazardous location. You must still ensure that the VFD doesn't come within about five feet of any vessel that contains flammable spirits and could be pressurized, but that's just a matter of training staff and clearly demarcating a safe zone for the pump.

Unlike the other cheats, this one doesn't have downsides that are quite so pronounced. It does look goofy, though.

The pump heads we use have no electricity running through them. They are mechanical. You could, if you wanted, attach a hand crank to them and they would still work; Albeit very slowly, and with very little pressure (depending on your arm strength).

The only sparking danger they could pose is from static buildup and discharge. Usually, though, they are grounded via the power cable. As long as your power receptacle is properly grounded, static electricity has a path to ground, preventing static buildup. You can also use conductive hose to further reduce chances of static buildup/discharge.

What About AODD Pumps?

So far we've talked about electrical pumps, but there's a whole other class of pumps that don't use any electricity at all: AODD pumps. 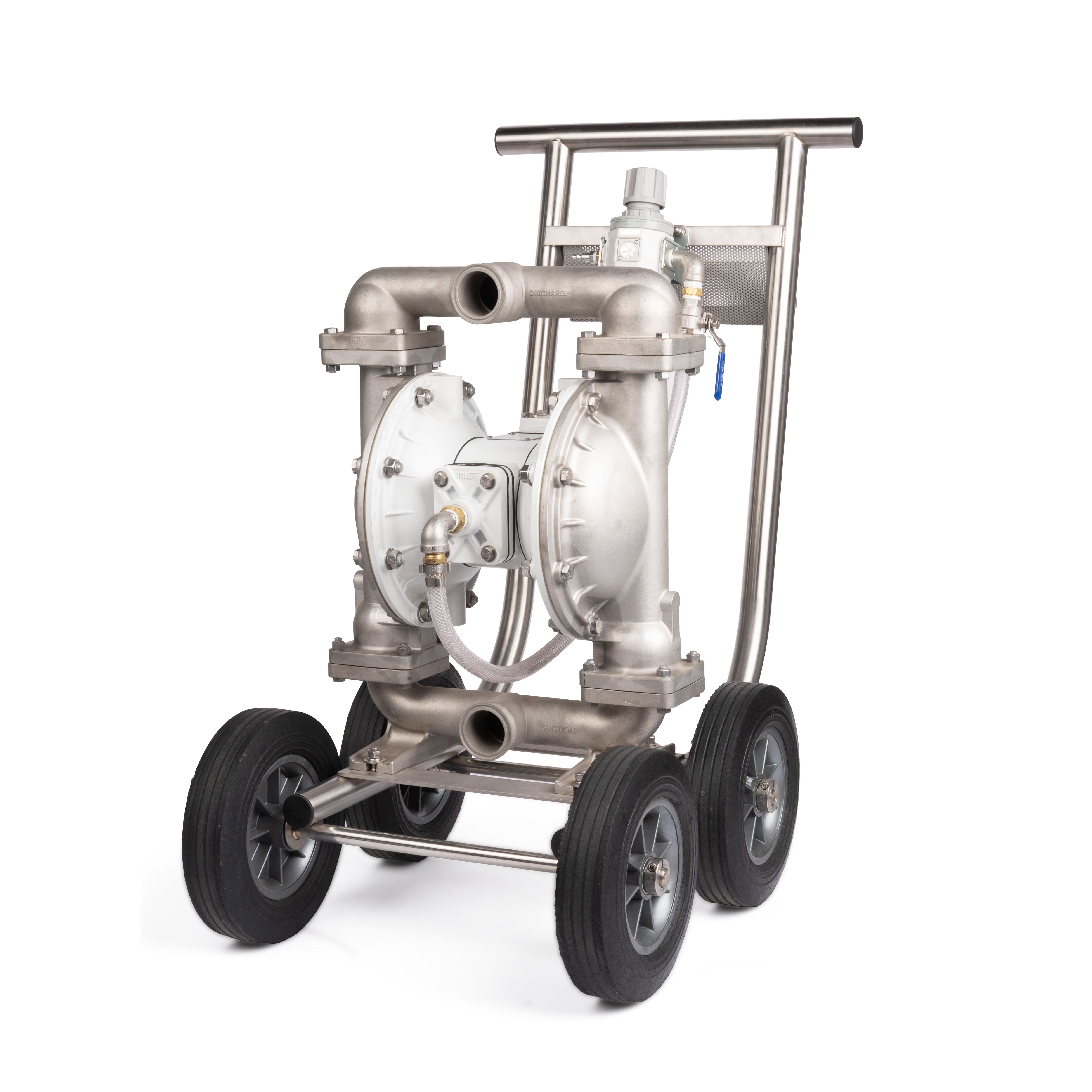 Air Diaphragm Pumps are a great choice for distilleries. There's no electricity to worry about. Thus, the chance of creating a spark that could ignite flammable vapors is drastically reduced. You should ensure that the AODD pump you select is fully groundable—both the “wet” side that comes into contact with the product and the “dry” side that converts the compressed air into power for the pump should be groundable.

All of the SimpleSpirits pumps we sell for distilleries can be fully grounded. To ground an AODD pump you just run a copper grounding wire from any bolt on the pump's body to a source of ground in your facility. Cold water pipes are often used for grounding since they usually begin underground, but you should consult an electrician if you are unsure.

In short, if you want to sidestep the issue of electricity and igniting flammable sparks, AODD pumps should be your first stop. We won't go into too much detail here as we cover them more extensively in our Guide to Air Diaphragm Pumps. Suffice it to say, if you have sufficient access to compressed air in your facility, they should be strongly considered, and they may be the only style of pump you end up needing.

Hopefully that gives you some ideas on where to start for safe pumping in your distillery. If you have any questions please give us a call. We love talking pumps!